Here is a story that deserves to be shared.

Sammy Kanja is a founding member of Zidisha’s community in Kenya.  He used his earliest loans to purchase a donkey cart and donkeys for his goods transport business.  The proceeds from this business enabled Mr. Kanja to return to secondary school, something that had not been possible in his youth due to financial constraints.  Mr. Kanja has maintained a 92% repayment rate over the course of four years of participation in Zidisha’s online microlending community, using the profits from the loans to grow his donkey transport business and diversify into dairy farming.  Two years ago Mr. Kanja’s wife gave birth to twins.  Mr. Kanja redoubled his efforts to grow his business assets, looking forward to acquiring high-quality educations for his children with the increased income.

Mr. Kanja also serves as a Volunteer Mentor, assisting other Zidisha members in Kenya to interact with our online community.  In October last year, we lost contact with one of the members he had helped, Mr. Fracis Kiiru.  After several unsuccessful attempts to call, Mr. Kanja went to visit Mr. Kiiru’s home and discovered that Mr. Kiiru had been injured during the Westgate Mall shootings in Nairobi and had been hospitalized.

Mr. Kanja went to the hospital to visit Mr. Kiiru, and discovered the latter in serious condition with no means to pay the hospital bill.  ”I told him i was given only twenty minute to because it was not time to visit them,” Mr. Kanja wrote to us in an email. “He shouted with the lound and started crying saing do not let me sleep here ones again because i have no money to pay for the hospital bill,my wife went away when i reached to the hospital on sunday.My heart beat like a disco becouse i was not expecting to here that.”

Mr. Kanja and his wife decided to sell the two donkey carts and the dairy cow that had been the source of their family’s financial well-being, in order to pay for medical treatment of Mr. Kiiru and of a relative whom they also discovered among the injured.

“I used the money to tranfer hime to the private hospital for farther treatment,as i am writing to you,he is in good condition and i am expecting to take him to his sister on wenesday as per the doctor,” wrote Mr. Kanja.

Mr. Kanja could have gone home quietly, telling himself that there was nothing he could do to help.  Instead, he traded his business assets, the source of his family’s livelihood and hope for a better financial future, to procure life-saving medical care for others.

Mr. Kanja may not look extraordinary and he will probably never be on the cover of a newspaper.  For me, though, he is a hero.

This story has a happy ending.  When Mr. Kanja’s story became known among Zidisha lenders, they decided to help, spreading the word to other lenders in our forum and collecting donations on his behalf.  Inspired by Mr. Kanja’s selflessness, even members who had never lent to Mr. Kanja contributed.

Ultimately, they raised enough to cover the cost of a new high-yielding dairy cow for Mr. Kanja’s family.  Mr. Kanja tells us that the new cow is extraordinarily productive, yielding as much as 20 liters of milk per day.  He keeps two liters for his family and sells the rest each day, generating a comfortable flow of cash for school fees and other family expenses.

This is an updated version of a blog post originally published in October 2013.

Twenty-four-year-old Wairimu Gathii grew up in a single-parent household in Nakuru, a beautiful but poverty-stricken town in Kenya’s Rift Valley mountains.  “What is unique about the land where I live is the fact that the land is so fertile and the landscape is simply breathtaking,” Wairimu writes. “It is my mother who has single handedly worked to bring up my siblings and I and give us an education.”

Wairimu excelled in school, and upon graduating high school she was accepted into the Law School at Moi University.  Tuition was an obstacle, though: at several hundred dollars, it cost more than most Kenyans earn in a year.

But Wairimu was creative and not afraid of hard work.  A family friend gave her a few kilograms of maize to sell in the market.  Lacking money for a market stall, she sold the cereals outdoors with only an umbrella to protect her from the elements.  From then on, Wairimu would spend the mornings carrying her sacks of cereal out to the market, slowly growing her sales volume as she used the proceeds to increase her inventory of staple grains.  The evenings were spent studying for her law degree.

By the time she found Zidisha, Wairimu was earning around $60 per month to support her tuition and family.  Her first Zidisha loan, of just $100, had a transformative impact.  She used part of the funds to rent a salesroom at the market, so that she no longer needed to carry the sacks of grain to and from her home each day.

The rest went toward purchasing more inventory, which allowed her to begin filling large-volume orders from nearby schools. “I have even expanded my range of dry grain by stocking wheat, and it is already almost running out of stock because the demand for the commodity is literally hitting the roof,” Wairimu wrote in a recent update to her lenders. “You have contributed a huge part to getting me where I am today, and I must say it is a better place that where I was a few months ago… I cannot possibly say this enough times: God Bless Zidisha.”

While reinvesting much of her profits in her business, Wairimu did not forget her family.  “My mother has noted the improvement too, because I am now able to contribute towards paying the bills and meeting our day to day basic needs,” she wrote.  “I am now able to buy her something nice once in a while.”

But the best news came just yesterday, when an ecstatic Wairimu posted this message and photo for her lenders:

“I completed my degree course and am super excited… THE MONEY EARNED FROM MY BUSINESS ASSISTED TOWARDS MEETING MY EDUCATION REQUIREMENTS… THANK YOU ZIDISHA.” 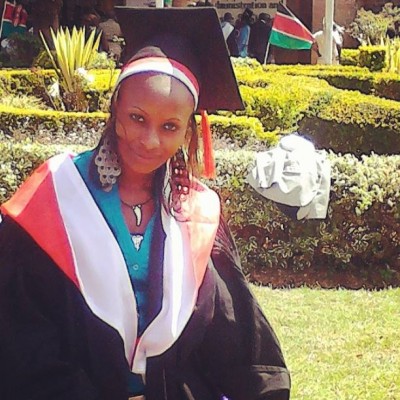 I hear stories like these every day, but they never cease to amaze me.  It’s incredibly inspiring to see so many people reaching out to help each other across such vast distances.  You are truly miracle-workers, and it’s an honor to be a part of this community.

Wairimu raised a $100 loan to grow her cereals business in October 2014.  You may read her story in her own words at her Zidisha profile page.

Zidisha gift cards are back, and we’ve made them better than ever! 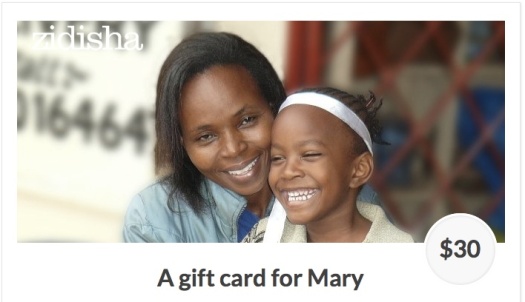 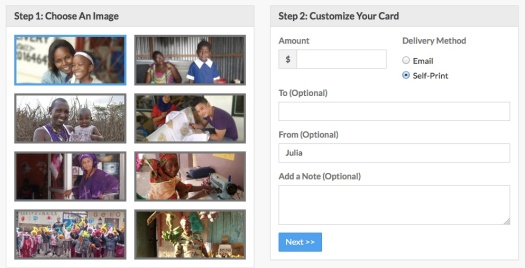 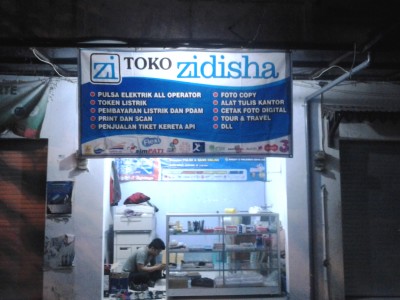 I’m Peter, an intern with Zidisha currently working in Indonesia. This month I made a trip to Surabaya, East Java, to visit our borrowers. Surabaya is a city of over 2.5 million people, but thankfully it’s much easier to navigate than Jakarta. While I was there I got to meet Rachmat Ismail (he goes by “Ismail”), who is one of Zidisha’s earliest clients in Surabaya. He found us independently through online research, and soon began recommending Zidisha to his friends after his own positive experience.

A view of the corridor where Ismail’s family lives

Ismail lives with his relatives in a traditional Indonesian semi-enclosed neighborhood (“kampung”) in the Petemon area of Surabaya. For the past year, Ismail has been working as a dental technician. For seven years before this, however, he worked as a photocopy machine technician, gaining valuable experience that allowed him to start a side business as a photocopy machine salesman and repairman. Ismail used Zidisha loans to support this business, and even named his shop after Zidisha!

Ismail is shopping for a new location for his photocopy machine business – one that is closer to his home than the previous space. Although his shop is currently closed, he continues to service and sell photocopy machines on his own – sometimes even delivering machines to other cities in Java. Like many Indonesians, Ismail also helps with a family enterprise. He and his mother run a shop out of their house that supplies the neighborhood with snacks, water, toiletries, and other daily goods. Neighbors stroll by throughout the day, stopping at the door to make purchases. It’s much easier to visit a neighbor than to venture out of the kampung in search of a grocery store. The income from this business is supporting Ismail’s mother, and also helping Ismail save money in anticipation of reopening his photocopy machine shop.

A neighbor stops by to shop during the evening. Ismail is helping her.

Visiting Ismail’s family was a great experience. While eating snacks generously provided by his mother, we watched Indonesian soap operas and talked about his business and experience with Zidisha. Ismail is very knowledgeable about Zidisha, and gives his time as a Volunteer Mentor to help other borrowers use the service and recruit responsible new borrowers. He is a wonderful resource for the borrowers around him, and a model Zidisha client. 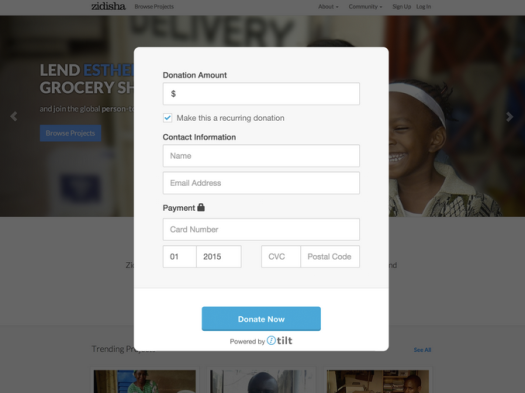 Not only that, but Tilt is making a generous holiday offer: donate or sign up for recurring donations by December 31, and Tilt will cover 100% of the credit card processing fees so that your full payment goes to Zidisha.

Give it a try!  To participate, simply click the “Donate” button here:  https://www.zidisha.org/donate