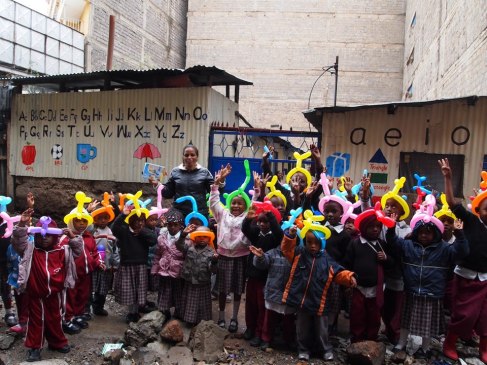 Pherister Ndoge, one of our members in Kenya who bootstrapped a school for disadvantaged kids in Nairobi

Americans celebrate Thanksgiving today.  It’s a holiday where we take time to give thanks for all the good things in our lives.

At Zidisha we have an extra reason to celebrate today: We have just crossed the $1.5 million mark in loans funded.  $1 million of this was funded within the last year alone.

Most of our borrowers do not celebrate Thanksgiving, but every day they share messages of thanks with our community.  In honor of the holiday, we selected a few that were posted in recent days to share with all Zidisha members:

Thanksgiving wouldn’t be complete without a sincere message of gratitude to the borrowers, lenders, volunteers and supporters who are making these opportunities happen.  On behalf of all those whose lives have been changed by your loans, please accept our heartfelt thanks.

Shimoda Air Force has come up with a new way to create great music via online collaboration – while using their art to make a positive difference on the other side of the world.
Brian Weingartner of Shimoda Air Force explains how it all started in this interview.
What is Shimoda Air Force?
Shimoda Air Force is a two-person band featuring Brian Weingartner and Josh Kross. Our influences include Wilco, Radiohead, WEEN, Miles Davis, and The Hold Steady. We are pretty much a recording project because Josh lives in New York City and I live in Philadelphia. Josh and I have been friends for decades and SAF was born out of our desire to make music together even though we lived several hours apart.
We share our recording files over the internet, making the recording process pretty flexible for us, and we have been able to give each other a lot of creative freedom to experiment with song writing and arranging, as well as recording techniques. Since we are rarely in the same room together when recording we have learned to trust the judgment of the other person, in a way that is completely different than any bands we’ve either been in before this.
I understand that SAF has an innovative revenue model, where your listeners themselves decide how much to pay for your music – and you are using 50% of your proceeds to make loans to Zidisha entrepreneurs.  Why did you decide to involve Zidisha?
This was really a multi-step decision on our part. After our debut EP “Stay On Target” had been on iTunes, Amazon, and Spotify for a year we were faced with the decision on whether or not we wanted to take a chunk of our profits to re-up with those services. When it came down to, it just seemed like a waste of money, and that there was something better we could be doing with that money. While having our music available on the big sites was cool, it ended up seeming like more of a status symbol to us instead of a sound business decision, especially because we are a small independent band. We also did not like having no control over what to charge for our music. We love making music, we love sharing the music we make, and any money that comes from this process is a bonus to us.
Once we made the decision to move forward with our music only on BandCamp and have the pay what you want model, we next came to what to do with the money we already made, and what we would do with the money we might potentially make. We decided we wanted to help make a difference in the world, and thought about a number of charities we would like to support. We ran into the issue that we would most likely be making a one time donation, and due to the amount of money we would be donating, make a relatively small impact. This led us to consider micro-lending.
Picking the right micro-lending organization was more complex than we anticipated. After considering several bigger names that turned out to lend with extremely high interest rates, we decided on Zidisha.  Zidisha provided us with a great opportunity to make a large impact on someone’s life, with our relatively limited profits, as well as the ability to roll over our loans into new loans as they are paid back. Once we figured this all out we became really excited about the prospect of being able to help multiple people with the same funds.
How have your listeners responded to the chance to support Zidisha entrepreneurs with their purchases?
We certainly have had several people express interest in what we are doing with the proceeds, and the feedback we have received has all been overwhelmingly positive. We chose not to hit people over the head with our decision to get involved with Zidisha with music that had been out for a year already. We have a new release coming in 6 months or so, and we plan on hitting the micro-lending aspect of what we are doing much harder with that release. We really hope that the positive interest we have received so far translates into a greater impact for our Zidisha lending.
What is your favorite Zidisha entrepreneur story?
Josh has had the opportunity to make loans to a lot of people, as he seems to always pick short-term loans that need a little money to finish.  His favorite, however, has been a larger loan to Yacine Moustatpha Gueye in Senegal.  One of the most interesting things about the loan process has been her constant updates about what she’s doing and where she is doing it.  She has posted about many other women she works with, and has kept us with updates about how the holidays and seasons are affecting business.  This gives a much better insight into the help we are giving the borrowers.
Learn more about Shimoda Air Force:
Website: shimodaairforce.com
Twitter: @ShimodaAF
Facebook: facebook.com/ShimodaAirForce
Get “Stay On Target”: http://shimodaairforce.bandcamp.com/

I am greatly impressed by the lending community for accepting my loan facility, this is impressive and a good example especially to African communities who are divided by tribal boundaries and the world at large.

The world is becoming united and am proud of that, one day, I had gotten tired after tarmacking for nearly two years and no one could offer my brilliant ideas a simple support. Today, the Zidisha community has done it all. Pierfausto, Green and others who will be willing to assist, just know somewhere in Kenya, Someone named Lawrence will always be thankful of your assistance in his lifetime en-devours. You will have contributed to my rising up…

Am honored, by the way the institute has really grown. I will post the current photos for you. I appreciate so much for believing in East African College of Technology and in me.

Lawrence Njunge used loans raised through Zidisha to grow his startup school, which equips young adults from low-income areas of Nairobi with the computer skills they need to access professional jobs.  You may learn more at his Zidisha Microfinance profile page.

Zidisha has been selected for an interview with Y Combinator!

Y Combinator was named by Forbes as the top startup incubator and accelerator, and is considered the world’s most prestigious program for game-changing online startups.  Such well-known companies as AirBNB, Dropbox, Scribd and reddit got their start with Y Combinator.

This is the first funding round in which Y Combinator has accepted applications from nonprofits.  An invitation to join Y Combinator’s inaugural round of nonprofit interviews is a strong vote of confidence in Zidisha’s potential to change the world.

Zidisha was selected because we are pioneering a radically new way of connecting individuals in the world’s poorest locations with better opportunities via an international person-to-person lending community.

Supporting such a revolutionary idea is never easy, but the payoff is immense.

It is thanks to the faith and generosity of our borrowers, lenders and volunteers that we have made it this far in making our vision of a world where geography need no longer hold people of merit back from the chance to build a better life.

When we featured Sammy Kanja’s story in this month’s newsletter, Zidisha lender Malcolm D wrote to me with an inspiring story of his own.  I am sharing it in here with his permission:

Thanks for sharing that heart warming story. I’m simply blown away by this man’s selflessness.

I’ve always prided myself about being willing to help people, too, although it’s obviously easier to help when one is somewhat financially secure.

On that note, I’d like to share another uplifting story with you. Many years ago while bicycling a few miles from home, I came across a car with its hood up. Didn’t think much about it. But on my return leg, I noticed a mechanic’s truck there, and also noticed a young Latino couple with a tiny baby. Being a helpful sort, being fairly fluent in el español, and especially being aware of how much bigotry there is in my area, I stopped to see if I could be of help-at least be translator.

This poor couple had bought their car in California the previous day, and were trying to reach apple picking jobs in Washington.

Turns out they were about $100 short of being able to pay the mechanic. Big problem!  I could see but one good solution, so I rode home and got some cash. I loaned them $150, so they’d at least be able to buy gas, etc on their way north.

I was struggling to get by, myself , way back then, but was frugal enough to always have a little cash set aside for emergencies.

The hombre offered to give me his drivers license “for security” . I told him I trusted him, not to bother. He did write down my address.

I’d loaned people money with no security s few times in the past, but never before to a complete stranger. I’d never been stiffed. This time, however, I thought I had been. I consoled myself by focusing on their obviously greater need.

One day, there was a knock at my door. A man asked, “remember me?”  I said, ” No. Don’t have a clue”.  “I’m the guy you loaned that money to”,he says. I about fainted! He went out to his new looking van, and brought his wife and EIGHT YEAR OLD SON into my home, and introduced them IN ENGLISH 🙂

He gave me $200 “including interest”  I told him that, being’s I was not a bank, I would not accept any interest, and I was just thrilled that he and his family were ok, and able to repay the loan.

Turns out that he’d lost the scrap of paper with my address on it, or he’d have repaid me long before he did. It was only when he cleaned out that car which had broken down near here, in order to sell it,  that he found the scrap of paper, under the seat. Since he was going beck to California anyway,  he decided to bring me the money in person.

My only regret is that I managed to lose his name and address, as I’d love to keep in touch. I DID send a very complimentary letter to a trucking company in Portland, OR, where he was employed.

I hope you, being in your line of work, find my story at least almost as uplifting as I found your story of Mr. Kanja.